Shot in Lucknow with the title standing to refer to a colloquial term used there, the screenplay has been set around a dilapidated building hailed as the Fatima Mahal owned by Fatima Begum (Farrukh Jaffar) while her name sake husband Mirza, a cunningly treacherous old man younger than her by over a decade and a half eyes on the property wanting to become the sole owner of the property soon after the demise of Begum!

The film has brought Amitabh Bachchan, the evergreen matinee idol of Bollywood and Baankey Rastogi (Ayushmann Kurrana), the fast rising talent, together for the 1st time with the two battling with each other all the time as a house owner -tenant respectively!

Though in his late seventies, Mirza is scheming and mischievous and would even resort to even petty thefts from the tenants to make a quick buck!

Enters Gyanesh Mishra (Vijay Raaz) from the Archaeological Department who is hell bent upon declaring the mansion as a heritage property so that the authorities could take over!

With Baankey refusing to pay rent while Mirza keeps chasing him for the same, the latter seeks legal counselling as the former wantonly damages a portion of the toilet wall!

Now is the turn of Christopher Clark (Brijendra Kala), a notorious lawyer who specialises in helping people to usurp property! He lures Mirza into selling his property so that he can get huge money as their joint efforts to get Begum to transfer the title of the property in Mirza’s name fail miserably!
An unexpected twist comes in towards the climax with Begum pulling a fast one by thwarting the greedy plans of all those eyeing the property! This is the best segment of this movie which otherwise is dull (as dull as how the mansion looks!) and dreary for most part!

Somehow or the other, Amitabh Bachchan doesn’t seem to fit the character of Mirza with the overblown make effects and mannerisms failing to create a flutter!

Ayushmann just courses through his character without much of a fuss!

Abhik Mukhopadyay’s camera has captured the alluring old world of Lucknow is an appreciable manner.

Shantanu Miotra’s score is upbeat keeping up with the mood of the sequences.

Shoojit Sircar has woven a not-so-gripping tale on the consequences of greed based on the script of Juhi Chatuvedi. 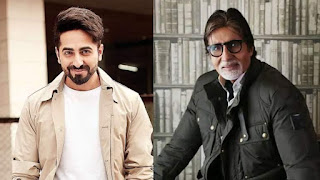 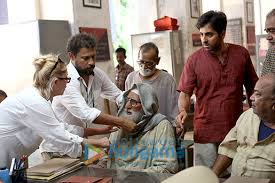 It was an intelligent move from the makers to have released the movie on OTT Platform rather than risking a theatrical release!
Bollywood Movies Gulabo Sitabo -Review