Let us take a walk down the theatre’s memory lane...

Several memorable, super hit films have been screened in this legendary theatre.

Like a professional sportsperson who is injured but not out, raising up like a phoenix, the iconic Devi Cineplex has always bounced back with the sole objective of always entertaining film lovers with their upgraded technologies .

Find attached down below, a video file...

Devi Cineplex has always stood the test of time standing tall always, as a symbol of architectural beauty and design! Located in the very heart of the city of Chennai, it houses multi-level State of the Art four Cinema halls - DEVI, DEVI PARADISE, DEVI BALA, DEVI KALA - on different floors of the same building. Devi Theatre was opened on 23-05-1970, Devi Paradise on 05-07-1970, Devi Bala on 12-08-1971 and Devi Kala on 21-11-1974.

Devi Cineplex holds the distinction of being the first to introduce online reservation for car parking and valet parking facility.

DEVI CINEPLEX, is proud to announce that Devi Audi is now equipped with the Top of the Line BARCO SERIES II PROJECTOR - DCI COMPLIANT DP2K-32B for its unmatched Quality, Image Sharpness & Brightness, Vibrant colours and exceptionally Rich contrast levels and also with Qube XP-I DIGITAL CINEMA SERVER-IMB. The newly installed amazing High Gain Screen with SEAMLESS JOINTS TECHNOLOGY has a CURVILINEAR width of 72 feet and 30 feet 6 inches height and with a projection distance of 133 feet with an amazing projection quality.

Several classics as The Man Who Would Be King, The Golden Voyage of Sinbad, The Odessa File, The Omen etc released here had a dream run drawing huge crowds!

Located on the third floor, this Cinema Hall is now equipped with the BARCO SERIES II Projectors – DCI COMPLIANT DP2K – 32B for its unmatched Quality, Image Sharpness & Brightness, Vibrant Colours and exceptionally Rich Contrast levels and also with QUBE XP I Digital Cinema Server.
Known for the release of several Hindi movies, Devi Paradise had many films of Amitabh Bachchan like Naseeb, Suhaag, Mr. Natwarlal, Satte Pe Satte etc enjoying tremendous run based the response of the filmgoers!
Rikshawkaran, which earned a National Award for M.G.R. had a dream run at Devi Paradise!
Ulagam Sutrum Valiban, produced & directed by M.G.R., recorded its stupendous success story by its marathon run, here at Devi Paradise.

Located on the top most floor of the Theatre Complex, the screening hall was used for select purposes. 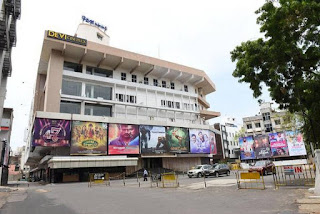 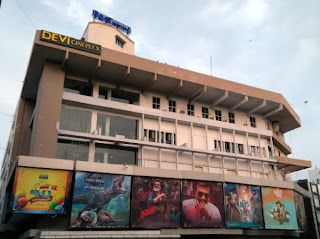 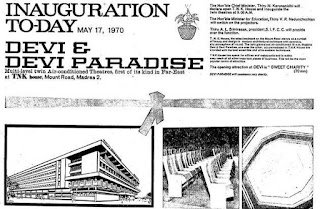 Special Shows & Premiere Shows for Select Guests & Media used to be held at either of the theatres.

While Columbia Pictures had its office in the same Building Complex, 20th Century Fox & Warner Bros. had their offices in the neighbourhood facilitating screening of Hollywood films at Devi.