More the film’s horror elements, it is the content of comedy that too in the film’s 2nd half that works out well paving way for some rib-tickling situations in this flick that stocks suspense which is unveiled only towards the end!

Tamannaah looks fetching, exuding grace & charm! Munishkanth dons a character that is both serious & light hearted supported ably by Sathyan, Kali Venkat & TSK. Yogi Babu enters the scenario only later but each time he come in , proves a scene-stealer!

Ghibran’s music is a very big plus for the proceedings.

Saravanan (Prem) who lives in Malaysia anxiously returns home as his parents are believed to have died in the floods.

Before heading back, he tries to dispose his palatial ancestral property but there begins a series of ghost-ridden issues that have been presented more on the lighter side!

The closing portions are enjoyable though they appear a bit contrived! 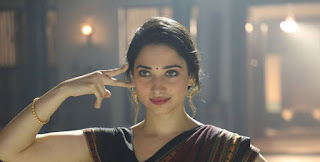 A good time pass if you care for some fun to laugh away your problems!
Kollywood Movies Movie Reviews PRO Nikhil Tamannaah.