Years earlier, Sivaji Ganesan had acted as a man suffering from night blindness in Thavapudalvan directed by Mukta V.Srinivasan. in the contemporary scenario, Vaibhav who has created his own slot at Kollywood despite the fact that is dad, A.Kodandarami Reddy is a well known Tollywood filmmaker, has played a site engineer suffering from the same disease.

The crux of the plot conceived & crafted by the debutante filmmaker is set around situations that land the protagonist in troubled waters after he is wrongly believed to be the leader of a protest group!
With such being the premise, can there be a dearth of fun & frolic? Well, those are all there in abundant measure!

The added attraction to all this props-up in full size when he happens to fall in love! 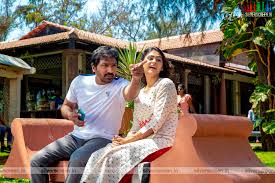 The film has enough & more of scenes & sequences to keep the audience in splits most of the time but stretching it out for over 2 hours has proved rather a herculean task for the first time filmmaker as the strain shows after a while!

Pallak Lalwani as a news reader is adequate but the lip sync lets her down at places! RNR Manohar as the politician with a criminal record just does what is expected of him!