Shot mostly in Chennai with lady super star Nayanthara as the film’s leading lady, the main characters speak in Tamil to the extent they speak in Malayalam!

It is a delight to watch Nivin Pauly in the role of a drunkard & whenever he is shown in an inebriated condition, he manages to get his expressions quite right!

Aju Verghese proves a perfect companion to Nivin Pauly & their combination sequences are bound to bring the house down with their well-timed humour!

Nayanthara has executed herself gracefully & is quite natural when she switches from Tamil to Malayalam & vice-versa.

Following a broken relationship with a Swathy (Durga Krishna) Dinesh (Nivin Pauly) hits the bottle but he plus himself up during Swathy’s wedding thanks to the graceful appearance of Shobha (Nayanthara), Swathy’s friend, who comes in to attend the wedding!

How Dinesh & Shobha unite after facing several hailstorms is the lengthy yet interesting rest! 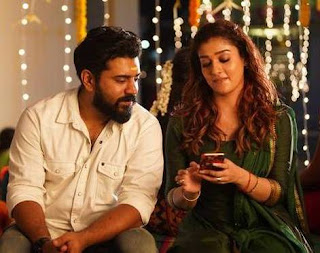