Suriya swings back to action mode engaging in some breathtaking stunts in this nail-biting thriller the screenplay set around a security officer to the country’s P.M.  Suriya has come up with a powerful portrayal & also champions the cause of agriculture too.

Mohanlal as the Prime Minister is dignity-personified & has executed himself effectively. It is worth mentioning that he has dubbed for himself!

Arya has a limited scope in a script that has two veterans on the movie but still has managed to make his presence felt!

Samudrakani too creates an impact.

Sayeesha has done her part with élan.

The cinematography of M.S.Prabhu & Abhinandan Ramanujam is truly breathtaking with some extraordinary visuals, especially in the action sequences!

The love angle between Suriya & Sayeesha is kept at a barest
minimum & there aren’t any distractions, so to say, from that count!

K. V. Anand’s directorial flashes are good but too many things have been packed-in, making viewing a bit tiresome at places! 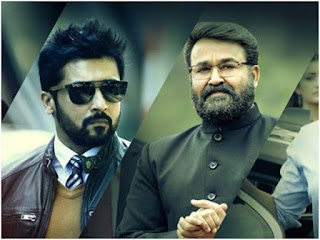 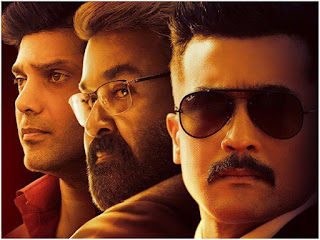 The film is too long & could have been edited more tightly.
Kollywood Movies Movie Reviews