What happens when an individual comes out of coma after over a decade & a half! This is the premise of this production interestingly scripted & handled by Pradeep Ranganathan, a debutante who has exploited the humour quotient of the plot in an interesting manner!

Jayam Ravi looks exactly like a school boy in those portions wherein he appears as a school-boy! Thanks to make up effects & technology too!

The combination sequences of Jayam Ravi & Yogi Babu are bound to bring the house down, thanks to the screenplay & dialogue! Also, both the actors stand out well in those well mounted sequences. Most of the situations are fun filled but one should not bother much about the absence of logic but are certainly engaging enough!

Ravi (Jayam Ravi) is busy wooing his lovely looking colleague, Nikita (Samyuktha Hedge) & even gifts her an idol but not before long, he falls into a coma for 16 long years! It is now 21st century & he finds it difficult to cope with the trends of the times!

It is an entirely a new world for him & every moment proves a struggle for him. He finds solace in the company of Reethika (Kajal Aggarwal) & learns through her that the idol was an expensive & unique!

He also comes to know that the idol is now in the possession of an MLA (K.S.Ravi Kumar) & decides to get it back!

Hip Hop Thamizha’s music & the cinematography of Richard M.Nathan uplift the proceedings to a higher level! 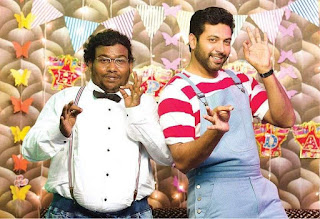 Melodrama too plays a part in the proceedings & the script throws light on some harsh ground realities too!
Kollywood Movies Movie Reviews