Touted to be the 1st movie in the country with a camel playing a crucial role, this is a heart-warming tale of a nuclear, agricultural family consisting of Vikranth, his wife (Vasundhra) & their little daughter.

A camel has been cast in a pivotal role in the film & it travels with the principal cast almost throughout the movie! The scenes involving the camel –both in our own rural backdrop as well as in Maharashtra have been canned effectively.

Both Vikranth & Vasundhra have played their parts with conviction the former scoring brilliantly in the latter half while being caught in the confines of another State that speaks a language that is alien to him!

The strong steps taken by a group that supports the cause of such animals have been subtly presented without initiating an ill-feeling, credit to the director.

Vikranth who wins a case regarding a land dispute seeks loan from various sources while trying to cultivate. A chance meeting with a bigwig who offers to help him with a loan, offers a baby camel too!

He & his family take care of the camel quite well but once when it falls ill, the doctor (M.S.Bhaskar) advises him to take it back & leave it behind at where it can join its folks. 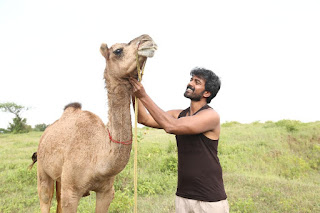 Vikranth sets out with the camel & how his mission takes a twist & how it ends finally is the emotional & interesting rest!
Kollywood Movies Movie Reviews