The preachy & sermonising tone of the film plays a spoil sport in this flick that intends to speak about the role of the teaching community! Jyothika walks her part with finesse & nicety but the screenplay, narration & treatment lack both carrying the flavour of listening to a lecture from atop a mountainous terrain!

She plays Geetha Rani the headmistress of a school but is hailed as the ‘headmaster’!

She gets a massy introduction followed by several monologues at frequent intervals!

Most of the artistes playing teachers representing various faculties appear as just caricatures excepting for the film’s protagonist who is a personification of all good virtues!

There is nothing to write home about the score of Sean Roldan’s score or the cinematography of Gokul Benoy. 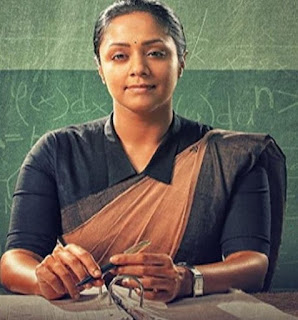 No doubt, Jyothika is certainly deserving of such mass-projection at par with a commercial, mass-hero but a strong screenplay should supplement or else, the outcome would be just like what it is here!