A.Sargunam who started off with Kalavani (2010) as a writer, director, has come up with this part 2 with the same lead pair as well as other supporting cast almost a decade later! Sprinkled with enjoyable humour, the film with a length of over 2 hours moves on stealthily & steadily without a fuss but with never a dull moment!

Vemal, clad in a white dhoti & white shirt, scores brilliantly as a sharp tongued youth with an unquenchable thirst to ride on the back of others, that too at their cost!

Oviya has no significant role here but moves about decently sand her glam-quotient!

Saranya Ponvannan appears to go overboard at places as a loosu-mother, similar to the loosu-ponnu kind of characters that are given to many of her heroines in many films!

Ilavarasu & Mayilsamy create an instant impact whenever they appear!

Durai Sudhakarar as Vemal’s competitor in the elections goes about his character in a graceful manner.

Arivazhagan (Vemal) the son of a village couple (Ilavarasu & Saranya Ponvannan) is a quick-witted youth who pulls a fast one with those around, doing nothing constructive or useful! Vikky (Vigheshkanth) is his trusted lieutenant. 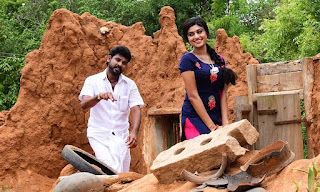 A chance encounter initiates Arivu to contest in the local elections with 2 other candidates in tow!
How he wins after outsmarting them both is the rest narrated in an interesting manner.