Vikram virtually carries the entire film on his shoulders playing a mysterious character with both the cops & the criminals in tow, out to silence him!

High on action, the film opens up on a spectacular note with Vikram breaking the window glasses & jumping out of a window!

A remake of the 2010 French action thriller, A Bout Portant (otherwise known as Point Blank), the film showcases a racy script with never a dull moment right through! Ghibran’s background score as well as a song or two keep the proceedings rocking! The breathtaking cinematography of Srinivas R. Gutha is of high standards & the chases wide across the length & breadth of Malaysian roads is indeed pulse-pounding! Praveen KL’s slick editing is yet another plus as the film showcases an accurate length of about 2 hours with non-stop action!

Who is Vikram in the film? There is enough & more of scope for the viewers to guess; but there a suggestions to think that he is a crusader for a cause, a double agent, an assassin & what not?
Even in the last scene where he appears & disappears momentarily, the viewers could only guess!
Aatirah (Akshara Haasan) & her husband Vasu (Abi Hassan) have just moved to Kauala Lumpur while expecting a baby. Vasu is a trainee doctor in whose ward, KK (Vikram) gets admitted in a crucial condition following a road accident which had occurred following a shoot out that had already damaged his abdomen!

There is a price on KK.’s head! Consequently, while Aatirah is being kidnapped Vasu is summoned by some unknown men to help get KK out of the hospital.

Vasu manages to do what he is asked to do & they both are on the run while being hotly pursued by cops as well as criminals! 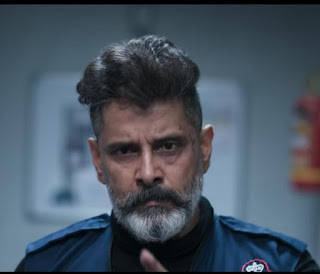