While Yogi Babu’s latest outing, Dharma Prabhu was a mythological comedy, this one projects him as a protagonist yet again! He plays a Gurkha & the director has thought of enough & more of situations that facilitate the actor to parade his skills in a fulfilling manner! Charlie, another senior comedian has done his part well appearing as his colleague. Raj Bharath as the scheming villain goes about his character with grace! Ravi Maria is loud most of the time & could have toned down a bit!
The theme is set around a bunch of guys with a notable past who take over a Mall in the city holding a theatre-crowd of people as hostages while demanding a ransom!

Bahadur Babu (Yogi Babu) who hails from a Gurkha family aspires to become a cop but finally ends up becoming a Gurkha at a popular Mall. by chance, gets acquainted with an American girl, Margret (Elyssa) & even falls in love with her!

Once the Mall is taken over by a bunch of people in the pretext of championing a cause, Bahadur Babu takes over the action quotient & how he outsmarts them in their own game is the interesting rest! 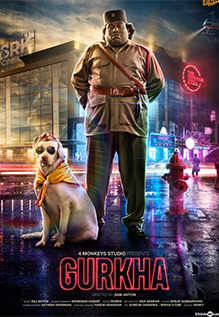 A fun filled ride inside the confines of a Mall!
Kollywood Movies Movie Reviews