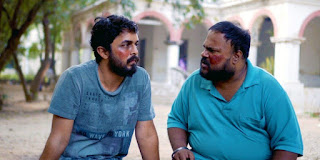 This inspirational movie is about the passion of a dad & his son both of whom wanting to travel to Mars through the simplest method possible!
Besides producing the film Vijay Sethupathi has also penned the dialogue. Biju has also assumed responsibility for the cinematography & editing.
No doubt the theme is something that is daringly different but the execution leaves much to be desired
Moreover, the screenplay lacks conviction as a result of which the scenes suffer from want of credibility!
The performance of the main cast is pedestrian but the film moves on stealthily.
Niranjan Babu’s music is a redeeming feature of this flick which has average production values!
No other salient feature of this film is the absence of a leading lady that which would have otherwise marred the steady flow of sequences!
Kollywood Movies Movie Reviews