Santhanam scores in his inimitable style in this comedy caper which is a full length entertainer. Tara Alisha Berry, the leading lady is subdued carrying herself well in the company of Santa. The others in the cast too have provided full support to the proceedings with M.S.Bhaskar deserving special mention as Santa’s dad!

On the face of it, the scenes & sequences are laden with fun & it is mandatory that one should not look for logic!

Moreover, the symbolic signs that reflect religious markings on the forehead pertaining to Saivates & Vaishnavites have been interchangeably used on the characters & the logical explanation to this could comfortably be assumed as ignorance of the making crew that has inadvertently mixed up & messed up with both!

The heroine belonging to an orthodox Brahmin family while the hero from the other opposite side of the neighbourhood!

A chance meeting draws them apart while their relationship takes a beating when the girl’s dad disapproves of their union!

How things get sorted out is the fun filled rest most of which is enjoyable! 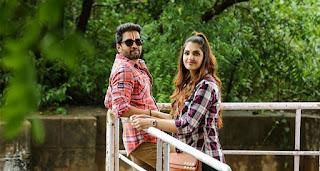 Santhosh Narayanan’s score is a plus for the film, the songs as well his background score livening up the proceedings!
Kollywood Movies Movie Reviews