THE TRIO TEAMS UP AGAIN!

Jackie Shroff & Anil Kapoor both of whom have acted alongside successfully several times are re-uniting with veteran filmmaker, Subash Ghai for a crime comedy, we hear! 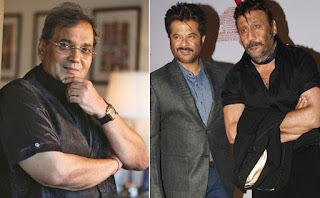 This is not the 1st time Anil & Jackie are collaborating with Subhash Ghai, as the duo has already starred together in Ghai's 1991 hit film Ram Lakhan!