Set against the backdrop of a bank robbery which also involves a child whose cost of surgery is banking upon the loot as her dad is the brain behind, the film is a racy thriller interesting & enjoyable for most of the part! The twist in the climax is a bit too dramatic though it does stun the audience by its unexpectedness!

Director Mysskin who has already proved his mettle as an actor too on some occasions in the past, takes on the role of a cop wanting to take the criminals head on, does a neat job here & has brought out the restlessness of the character in wanting to nab the culprits as quick as possible in a very effective manner!

Vikranth is convincing as the criminal on the run as well as the dedicated dad wanting to champion the cause of his little daughter!

Athulya Ravi looks good but her characterisation suffers from want of scope! Director Suseendiran who debuts as an actor creates an impact! 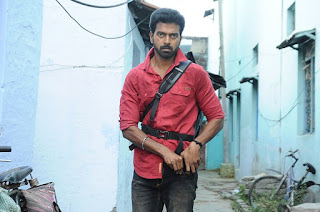 Had the screenplay been a little tauter, the film would have worked out better!