Supposedly a comedy, the film has its moments of entertainment but fails to create a flutter mainly owning to the unimaginative screenplay that leaves much to be desired! The film has a busload of situations that attempt to offer lighter moments but only succeeds to a fair extent!

Rio Raj looks good & performs well too excepting in the emotional scenes where he is found wanting! Vigneshkanth wearing printed Tees that carry & communicate punch-words most of the time is good at times but irritates otherwise!

Shirin Kanchwala looks blank most of the time without much of a role play in the proceedings!
U.K.Senthil Kumar’s camera has captured several colourful moments. Shabir’s score passes muster.
The theme is about a pair of ambitious youth earning through the revenue generated from a YouTube Channel while they restlessly roam about without a purpose in life.

A chance meeting with a bigwig throws an opportunity for them to access big money provided they fulfil 3 challenges posed by the bigwig! Radharavi does this part convincingly! 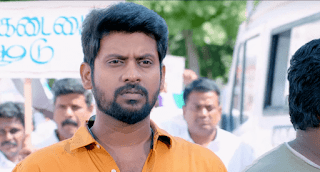 Towards the climax, the film tries to deliver a social message but in a dramatic fashion!
Kollywood Movies Movie Reviews