Cop stories are a prime premise for our filmmakers & Andrew has done his best out of the script executing it admirably well, most of the time! Kudos to the filmmaker for his stylish execution of this whodunit thriller which keeps the momentum alive till the last frames making the viewers guess as to who the real killer could be! The film opens with a cold blooded murder, letting the audience assume that it is the film’s protagonist who does it, going by the title! But there is a lot more to watch & know & of course to interpret things in the most unexpected manner possible!

Prabhakaran (Vijay Anthony) an ex-cop is a lonely man who works for a builder. His neighbour, Dharani (Ashima Narwal, a model making her debut here), living with her mom (Seetha) walk into trouble with the murder of a stalker as they both are suspected of having committed the crime! But Prabhakaran owns up to the crime & surrenders!  The investigating official, Karthikeyan (Arjun, a neat role, neatly executed!) suspects more than what he sees in the confession of Prabhakaran but is puzzled at the lack of connectivity between Dharani & Prabhakaran! The identity of the murdered person having been established the crime seems a simple case but Karthikeyan believes that there is much more lying hidden underneath!

How the puzzle gets solved is the interesting & absorbing rest!

Two scenes showcase the manner in which the murder could have happened but then the director shows his acumen effectively in these portions leaving not only Karthikeyan keep guessing but the audience too are made the game of guessing!

There is nothing much to talk about the performance of Vijay Anthony as he remains as rigid as ever; but the advantage here is that it suits his character!

Ashima draws a blank most of the time with her blank expressions!

One sore point is that both the cops-Arjun & Vijay Anthony, whenever in uniform are found keeping their 1st button of their shirts unbuttoned! 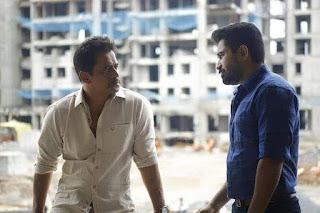