Yogi Babu has been elevated to the status of a hero in this meant to be-entertainer set against a mythological backdrop. There are of course a couple of fun filled moments in the film but on a overall view, the screenplay is weak with unimpressive & unimaginative dialogue owing to which the film fails to make the grade!

Yogi Babu & ramesh Tilak as the newly elected Yama & Chitragupta respectively steal most of the frames in the 1st & 2nd half while Azhagamperumal joins them as the film’s antagonist in the latter portions consuming couple of more frames but the outcome leaves much to be desired!

Both the screenplay & narration are basically weak & hence none from the star cast has been able to make it up despite some good work from the principal cast!

The CG work, costumes, scenes & settings- lack class & quality because of which the film fails to entertain as intended!

After Dharma Prabhu (Yogi Babu) takes over the mantle from his dad, Dharma Raja (Radha Ravi), he takes a trip down to the earth at the instance of his untrustworthy deputy, Chitragupta (Ramesh Tilak) who has an eye on the post of Yama(!), all hell breaks loose as Dharma Prabhu saves a little girl from definite death which would have caused the death of a caste-conscious bigwig (Azhagam Perumal) & incidentally, he earns the wrath of Lord Shiva (Naan Kadavul Rajendran). How he sets right things subsequently is the uninteresting rest!

Hindu Gods being projected in a funny manner seems distasteful! 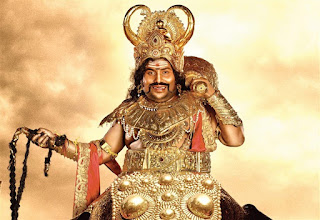