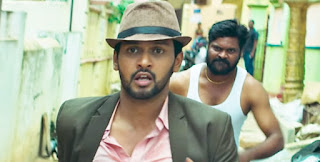 Directed by Swaroop RSJ, this Telugu flick, Agent Sai Srinivasa Athreya is an authentic humorous investigative thriller revolving around the adventures of a detective based out of Nellore!
When Agent Athreya (Naveen Polishetty) who runs FBI (Fatima Bureau of Investigation!) learns about an unidentified dead body that’s been found near a railway track, he instantly gets on the track of his investigation! The rest of the story is about how Agent Athreya cracks the case and unravels the mystery behind a series of such cases.
Television star Sruthi Sharma plays the female lead.
Maek K. Robin is the composer.