This is a light hearted science-fiction comedy that lays focuses on the greed of corporate companies to cash in on the desire of human beings who want to remain young forever by age-reversing process!
Veteran actress Sachu who has appeared as the heroine in AVM’s Veera Thirumagan besides playing comical roles in many films of the past dons a crucial character here-that of the heroine’s grandma who accidently gets into the hands of a business organisation researching on the process of age-reversing!

Shilpa Manjunath plays her granddaughter while Livingston appears as Sachu’s son!
Within the constraints of a limited budget, the makers have put in good efforts to make the film as grand as possible!

Shilpa Manjunath has put up a good show as Sach’s granddaughter. The twist in the tale is the fact that Shilpa doubles for Sachu after the latter undergoes the age-reversing process! 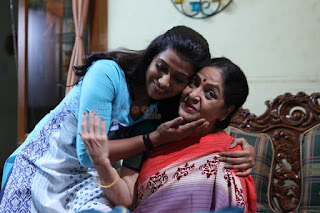