This is a kind of twisted sequel to Neeya (1979) which was actually a remake of the Bollywood blockbuster, Nagin (1976) which was inspired by François Truffaut's film The Bride Wore Black, based on Cornell Wollrich's novel of the same name! Reena Roy played the snake woman in Nagin while Sripriya depicted that character in Neeya. Well, it is the turn of Raai Laxmi to appear as the snake woman which she does to a reasonably good extent!

Jai included, the rest of the others in the cast have done their parts with some understanding leaving much to be desired!

The theme is about a shape-shifting serpent that sets out in search of her lover & the screenplay is set upon its struggles. 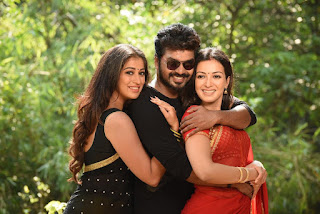 Shabir’s music just passes muster while Rajavel Mohan’s cinematography is commendable.
The narration follows a straight path without much deviations & distractions but the execution could have been more effective.