The film boasts not of big names cast-wise & crew-wise but a simple knot has been presented quite well in an interesting & enjoyable manner that it stands out as a good entertainer! After possibly a slow start the screenplay picks up momentum quickly which gets maintained till the closing frames. Even the serious scenes have spontaneous humour that blends so well with the proceedings!

The theme is about 3 friends, Siva (Kavin), Raju (Raju) & Mani (Arunraja Kamaraj), all of whom are ambitious but end up doing nothing! Inspired by a local businessman, Ramanan (Ilavarasu), a successful marriage contractor, the trio set out to start up a similar business which they do too! As their business picks up well, a twist comes in the form of a girl named Shruthi (Remya Nambeesan) for whom Raju falls flat! When the other two get to see her, Siva too falls for her charms & by using Mani as a pawn, intrudes & wins her love much to the chagrin of Raju.

How things get sorted out is the rest! 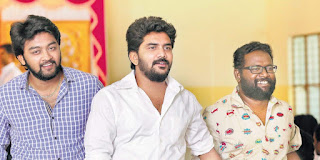