Basically the screenplay has been set around the battle of both brains & wits between a good hearted man who is an ardent follower of Vallalar (his pre-monastic name being Ramalinga Swamigal) & his postulates & a rat which has converted his home into its home!

S. J. Surya, who usually prefers donning characters most of which are offbeat, has taken up a neat & clean character here that has a lot of depth as well! On an exaggerated note, his characterisation is such that every girl aspiring to get married would want to enter into wedlock with someone like him! The opening prelude serves & stands as a pointer to the depth of the characterisation of the protagonist for whom compassion is the calling card!

Anjanam Azhagiya Pillai (S.J.Suryah) is an eligible bachelor employed in E. B. & his colleague (Karunakaran) is a good friend too. Meghala (Priya Bhavani Shankar, whose performance in an underwritten role is as cute as her own self!) avoids showing up when Anjanam visits her home for the bride-seeing ceremony but later calls him up to apologise which eventually leads her into falling for him on the merit of his benevolent nature.

Anjanam who has already moved into his new flat is forced to face the inventive excesses of a rodent living there with both of them sharing a special liking for rusk! All his efforts to get the unwelcome occupant out of the place fall flat!

There is a parallel yet unwanted track wherein the villain (Anil Kumar) a smuggler packs in diamonds inside rusk! He was actually the previous occupant of the flat now inhabited by Anjanam!
The rest is on predictable yet enjoyable lines! 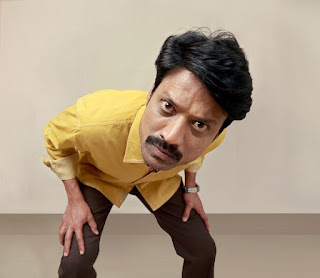 Nelson the maker has set the script & has also gone about directing it in a very sincere & effective manner that the audience are convinced that the rodent in question is the real villain of the piece! There lies the success of the script which is certain to lead the film to a successful run at the box-office!