The writer, director has taken up the theme of small flies being swallowed by the big ones personifying humans with the mightier ones preying upon the weaker ones! The plot seems perfect but it is the screenplay & its execution that leaves much to be desired!

Jiiva plays Siddharth, a happy hacker with Rajendra Prasad & Suhasini as his parents.
Sid bumps into Shiva (Govind Padmasuriya), another in an unexpected manner who is actually a devil in human garb! Technology is what Shiva, the film’s antagonist uses to interfere & manipulate the lives of commoners as incidentally we see a lot of computers, mobile phones & other devices & gadgets!

Nikki Gilrani as Diya & Anaika Soti as Vandana just fill the bill while RJ Balaji comes up in a manner that is not so impressive!

The film aims to warn the viewers about the perils of subjecting technology for exploitative purposes but the inclusion of commercial elements & the attached romantic angle literally play spoil sport marring the seriousness!

Also, the confrontation between the protagonist & the antagonist should have been thought of & executed better as it lacks the much needed punch, so to say! 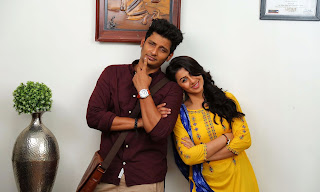 A good plot that could have presented more effectively!