ALL SET TO GO 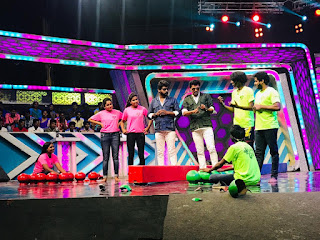 One of the most popular television game show is Ready steady Po 2. The show is full of entertaining games and excitement. Being a favourite show for many youngsters, the show is aired every Sunday at 1 pm.

The show will have young and vibrant girl participants, not necessarily be a celebrity sometimes. It’s an entertaining game show with fun tasks. Every episode the show will have two teams with three members each. So far, the show has seen enthusiastic people taking up the fun tasks

This week it’s going to be lot more fun. Yes, for the first time in ready steady Po, among two teams, one will be girls team and the other will be boys team.

The boys team comprises of our Kalakka Povathu Yaru stars like Dheena, Sathish and Bala. On the other side, gorgeous models and actress will be competing with them.  The show will be extra loaded with fun. Sounds fun, right?

The show is hosted by two fun loving and charming male anchors- Rio and Andrews. Rio is a popular anchor turned actor, who is busy shooting his debut film. And the Jovial anchor Andrews is hosting the show along with him, who is also busy shooting for a pivotal roles in a film. The show will bring a new level of entertainment to your TV screens. So, don’t miss the fun and entertainment only on Vijay television.