Heroes appearing cops in no new ball game & it is good to see Atharva Murali as a dare devil cop looking as fit as one can be but unlike in the other cop-movies, the protagonist is posted at the Police Control Room! It is but a fact that the detailing that has gone into the functioning of the Police Control Room deserves special mention; but unfortunately, the seriousness of the others working there barring the hero hasn’t been established properly & that includes the character of Yogi Babu too who too gets posted there, absolutely lacking in credibility as far as that character is concerned!
Sathya (Atharvaa) who spends his time mostly in a not so purposeful manner is awaiting posting as a cop! While he aspires of getting into the crime scene of action, he is posted at the Police Control Room which he almost deems as a dream destroyed!

The narration is also about another cop, Anwar (Mahesh, looking dull & dejected most of the time!), his sister, Ayesha (Harija) & her lover who holds the button to release a twist in the tale, finally! And there is a gang of dope smugglers who also kidnap young girls to be ‘supplied’ to those who ‘demand’ them for a price! So on & so forth!

Radha Ravi as Atharvaa’s mentor evokes not much of a sympathy in a sympathy-stricken role!
Sathya’s 100th call at his job stirs him into action mode having been in the static mode for too long a time till then!

The second half moves faster with too many twits & turns most of which appear implausible!
Late Cheenu Mohan impresses as a baddie; so does Mime Gopi. Hansika Motwani has a blink & miss role & is hardly seen in the scenes! When she makes a belated appearance in the film’s latter half, she is almost forgotten by the viewers! 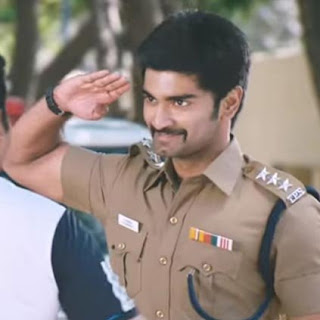 100 is significant for Atharvaa as it showcases him as a cop who means business!