Mid-life crisis is an unavoidable situation in everyone’s life whether they get to age gracefully or not! Premier Padmini featuring Jaggesh, Madhoo, Sudha Rani, Pramod & Panju deliberates on such a theme with the protagonist facing issues job-wise, his better half looking forward to part ways with him & their son being equal in hating them both! When all appears lost, Vinayaga, the protagonist takes out a journey with his driver Nanjundi in his Premier Padmini car & as they both fathom distances, Vinayaga realises that all is not lost & one can always re-start afresh with the same spirit & vigour like when it was done at the point of start! 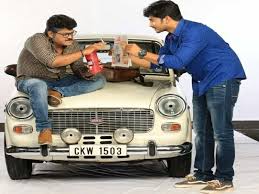 Arjun Janya has scored the music for this flick directed by Ramesh Indira.