‘PARA’-A PERSPECTIVE!
Writer, director & actor Samudrakani has never missed an opportunity to lap up a good script that demands his powerful portrayal. Para is one such noteworthy project that caught his attention in which he is appearing as an advocate championing the cause of the downtrodden masses.
Directed by Keera, the film’s screenplay is set between from 12.00 midnight to 12.00 noon over a span of 12 hours!
It follows the following characters through that stretch of time-
1.     A platform dweller
2.     A pair of eloped lovers
3.     An elderly couple
4.     A thief
5.     A lawyer
6.     A politician
7.     A policeman and
8.     A dancer.

Chandini, Venba, Nitish, Munishkanth & Shijumon are also in the cast. 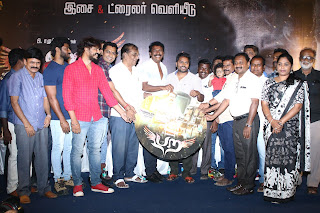