Vijay Anthony who has of late turned a commercial hero churning out mass entertainers has tried that formula yet again with Ganeshaa who debuted as a director through Nambiyar (2016). It is worth noting that Vijay Anthony had scored the music for that flick!

For the first time in his career as an actor, Vijay Anthony has donned the garb of a cop & it would only be fair to say that he has spared no effort to present himself in as realistic manner as possible!
The director needs to be complimented for dishing out a tale that is devoid of unnecessary duets. Also, the film has steered clear of unnecessary comedy in the pretext of breaking the monotony of an otherwise serious theme!

Vijay Anthony plays Murugavel, a cop who does not approve of his younger brother’s style of leading his life!

Annoyed by Murugavel’s constant lectures about leading a good life, the younger brother takes to his heels & it is only later that he learns that his brother deputises a goon named Padma (Sai Dheena).
Owing to the force of circumstances, Murugavel is forced to kill his brother & subsequently vows to save the other boys caught in the clutches of Padma & offer a peaceful life to that neighbourhood!
Nivetha Pethuraj too appears as a cop though to no big avail!

The film does offer the viewers a couple of engaging moments but the screenplay could have been a lot more effective as it gives a preachy-feel too very often! 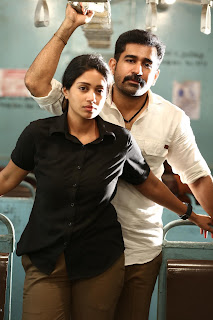