In a nutshell, the plot is about the extraordinary steps taken by an NRI whose vote had already been cast by another person!

With all the commercial ingredients that usually form part of such mass entertainers falling in perfect place the director has spared no effort to lift up the image of the hero to further heights! From Vijay’s side, he has made his future plans clear-that he wants to enter public life & champion the cause of those who are denied & deprived of even their basic rights, especially the right to vote! The 1st half looks very good reflecting the amount of research the director has put in & his eye for even the minute details but the 2nd half strictly follows the commercial format leading to a dramatic climax!
Vijay’s looks have undergone a sea of change here & he fits the bill like a T! As usual, he fights dances & romances to his heart’s content while the proceedings follow a formulaic content! Yogi Babu’s cameo doesn’t create a big flutter! Keerthy Suresh’s characterisation looks shallow like her performance that lacks depth! So does Thulasi’s role as a mom who points an accusing finger at her daughter Varalaxmi Sarathkumar (who enters the fray later in the day to not much of an impact!) which looks a bit contrived!

Vijay who holds a lucrative position abroad in a global conglomerate returns to his motherland to cast his vote that has been already cast by someone else! He takes up the issue legally & the Court grants him permission to vote yet again! Many others follow suit & the ruling party’s plans of action are disturbed! They rub him on the wrong side & he decides to contest the elections! He mobilizes candidates all of whom are socially conscious citizens & they all contest & win as independent candidates! The climax reveals what Vijay’s plans are! 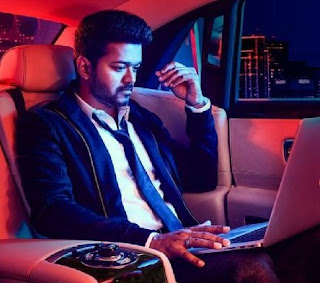