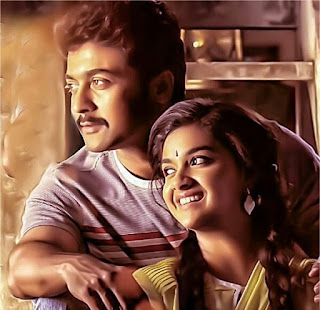 An adaptation of Special 26 (2013, Hindi) this flick is a feel good venture with several light hearted moments right from the moment go till the closing portions! Suriya fits the character like a T playing a dynamic youth who aspires to become an officer at CBI at where his dad (Thambi Ramaiah) as a clerk!

The theme focuses not on the outbursts of an angry young man who decides to take on the system using a different route after having been denied his rightful place at a workplace that he had been dreaming of since his childhood! His dad too has a concurring dream- as a clerk employed there he wants to serve his son in the capacity of a CBI officer!

But a senior officer, needless to mention a corrupt one, topples the youth’s dreams following which the youth decides to do it all himself whatever he had planned to do after taking charge!

Suriya is the fulcrum of the film and moves about his character in his inimitable style as ever! Calm and composed he makes his moves perfectly never going overboard nor underplaying all in tune with the demands of the situations!

Kalaiyarasan cuts a neat cameo as an aspiring cop but at one point he chooses the easy way out when he realises that things are not going to happen as planned!

Keerthy Suresh appears to have been cast in an apology of a role and does the vanishing act right in the first half itself and she gets virtually forgotten in the second half!

Anandraj does a neat job as a politician and his portrayal warrants mention!
Set in the eighties, the film carries a period look showcasing a famous theatre on Mount Road that has become extinct!

Iniyan (Suriya), affected by the highhandedness of the senior CBI officer, Uthaman ( Suresh Menon, back in form as the antagonist!) starts raiding the residences of people who are powerful posing as CBI officer aided by a few others who willingly come forward to take up the ‘assignment’!

Yesteryear hero Karthik makes a belated entry but to no avail though a ‘built up’ is given at the point of his entry!

The film’s second half moves as briskly as the first half but the fact remains that the climax leaves much to be desired!

The music of Anirudh and the cinematography of Dinesh Krishnan add pep to the proceedings!

DRK Kiran, the art director needs to be complimented for keeping up the levels of the film’s period look in a subtle manner and not making it too very glaring!
Johnson PRO Movie Reviews Studio Green Suriya Thaana Serndha Koottam-Review Vignesh ShivN