Susi Ganesan’s erotic thriller, Thiruttupayale(2006) was a big hit as it was very well written and executed expertly! After a decade’s time, Susi has made this film that not exactly a sequel, for the same production banner! The tendency to take advantage of any situation that seems beneficial was the crux of the plot of the previous film which has been ceremoniously adhered to in this too carrying a title that this could be a sequel to the 2006 film! Yet another similarity is the fact that Susi plays a detective in this too as he did in that; the only difference is that he too has become a ‘thiruttupayal’ here exploiting situations and obviously people too! The original film’s climax was really well conceived and crafted but the director has preferred to take a different route here!
Even with our closer ones, it is better not to share secrets which may eventually affect the peace of mind of both the persons concerned! Even if one gets to know the others’ secret but without the other person knowing that, it is better for the person who has accessed the secret of the other to remain quiet and not make it known! This is the note with which the filmmaker ends the tale before the curtains are down but the point driven home that every single individual has another side that is not exposed to others! The film takes a stylish dig at the tendency of human beings to exploit situations to their favour whenever an opportune moment springs up!

The trio in the main cast-Bobby Simha, Amala and Prasanna have done their parts with an immense sense of understanding with Prasanna comfortably pulling the rug under the feet of the other two in an effortless manner! He is certainly better off as a baddie than playing the protagonist and this is the second time that he has proved it! Earlier occasion was in Mysskin’s ‘Anjadhey’ and he had won encomiums from all possible quarters for his character carrying grey shades to the fullest extent! Amala Paul is effectively seductive, of course, at home with her husband!
Like these three characters, the character of Muthuraman playing Bobby Simha’s superior officer is also well written. He too has risen to the occasion adequately!
Vidhyasagar’s stamp is evident in the theme music but it would only be fair to say that Barathwaj, the scorer of the 2006 film had come up with some very good numbers! Chelladurai’s camera work and R.K. Naguraj’s art work warrant special mention.
Selvam (Bobby Simha) is a surveillance specialist who is considered a honest cop but he has another side that is not known to others, his family included! Agal (Amala Paul) is his cute looking, rather provocative wife who is very active with the social media! What starts as a casual relationship through posting and chatting with a friend on the social media, Balki (Prasanna) turns serious with Balki nursing a secret agenda! He is techo- savvy and a compulsory womaniser! At one point, he makes his intentions clear to Agal who gets jittery!

Meantime, Selvam, who by now has become an addict of his surveillance job, taping phones left right and centre, starts tapping Agal’s phone too and gets a glimpse of what’s going on between her and Balki! He uses his official status to check Balki’s moves but Balki proves several shades smarter and checkmates Selvam!

How the cat and mouse game ends is the reasonably engaging rest!

The scene where Prasanna visits Amala Paul after duly informing Bobby who rushes home urgently and the married couple play up before an unusual visitor has been conceived and mounted very well! 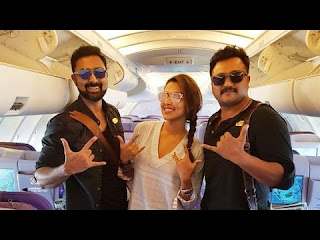 Susi Ganesan cuts a neat cameo as a detective who too is an opportunist!

The film drives home a word of caution to all those who over use and misuse the social media though not in a preachy manner!
Amala Paul Bobby Simha Movie Reviews Prasanna and Nikhil Murugan Susi Ganesan Thiruttupayale 2-Review