C.V.Kumar who began his career as a filmmaker with the much acclaimed Attakathi went on to produce films that were watch-worthy like Pizza, Sodhu Kavvum etc and in the bargain, had also launched very many filmmakers like Ranjith who have turned really big! He has now launched himself as a director and daringly so, has taken up a very complicated theme for his debut!

In one way, the film could be categorised as a science fiction that blends the contemporary scenario. Interestingly, the film opens up on a futuristic note with the scene dated to 2037 before coming back to the present (2017).

Sundeep Kishan who is riding on a high wave since Maanagaram has been cast in a different role here-that of a cop who undergoes some traumatic experiences soon after witnessing a cold blooded murder and in the following clash with the murderer, he almost kisses death!

Jackie Shroff makes a belated appearance close to the closing portions of the film but still manages to make quite an impact!

Bhagavathi Perumal who stole the show in Naduvule Konjam Pakkathai Kaanom and Pichaikkaran as well, has been cast in a crucial role here and he has made the best out of the opportunity offered!

The theme centres around a series of murders and the young cop who takes up the investigation is rather shocked than surprised to find that they are all eerily similar!
The film is a gripping thriller, a whodunit and he has tactfully blended elements of a science fiction! No doubt, the film takes its time to settle down but once it gets settled, then it follows a steady pace loaded with several twists and turns most of which are unexpected!

Sundeep Kishan has carried himself well throughout the proceedings and has registered the right kind of expressions whenever he his upon a black wall in course of his investigations! Lavanya Tripathi as a psychiatrist is adequate but her lip sync leaves much to be desired!
The plot is about a cop, Kumaran (Sundeep Kishan) who stumbles upon a murder. In the chase that follows, the murderer gets killed and he too almost dies only to recover after a while. More murders take place and a similarity is seen by him that is most puzzling! With that murderer (Dheena), already dead, how can the same pattern of killing could be executed is the billion dollar question!

As the case progresses, Kumaran realises that there is more facts hidden underneath than those that meet the eye!

Further investigations take him to a science research centre where he unearths some shocking facts about a research scientist who is already dead!

As he moves on, more shocking occurrences spring up pushing him into a tight corner!
How the puzzle gets sorted out finally is the thrilling rest! 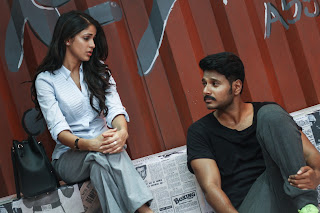