Perhaps the season is ripe for a new set of filmmakers to arrive with a new format and technique of film making that virtually holds the key to lift the art of filmmaking to higher levels!

The film written and wielded by a virtually new talent, Arun Prabhu Purushothaman has all the trappings that normally go with films that are showcased in Film Festivals! It is sheer boldness of the young filmmaker to have chosen such a theme and more importantly to have presented in a manner that even seasoned filmmakers would just be taken aback!

Primarily, he has taken up two aspects from the society that has a direct bearing on the common man.  Firstly, it is about a young girl hailing from a middle class backdrop gets affected by AIDS and on expected lines, she is ostracised, first by her family and by the society! For those of the men folk who are not aware of her health condition, take advantage of the fact that she is out in the open that too all alone and go all out to exploit her!

Secondly, she places a television studio under siege and causes law and order problem!
How these two are intermingled and what happens finally is the crux of this film that has been presented in a very riveting manner.
Newcomer Aditi Balan is an excellent choice for the role and it would not be an exaggeration to say that she has just lived the role! An excellent portrayal indeed! The others in the cast too have done their roles with a lot of understanding. The scenes and sequences have been constructed in such an effective manner that it appears so realistic! The best part of the film is the fact that nowhere the proceedings appear contrived! Also, melodrama has been totally dispensed with and the narration moves in a matter of fact manner!

Undoubtedly, the script is unconventional but very well written without much of commercial compromises!

The film takes a strong dig at the attitudes of television channels that spare no effort, leave no stone unturned to exploit the social happenings, regardless of the consequences with the sole objective of boasting their TRPs! Those portions appear a bit dramatic but they certainly drive home a message to all of them, that too in a very powerful manner!

The first time filmmaker has handled a very sensitive subject in a very sensible manner exhibiting a unique flair! He is certain to go places!

The manner in which he has played with the time 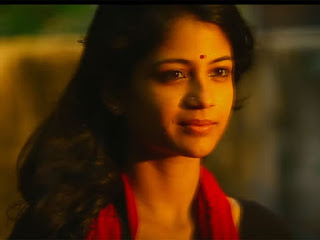 frames in the opening sequences wherein Aruvi, the film’s protagonist is taken up for interrogation speaks volumes of the young filmmaker’s acumen as well as his control over the medium!

The scenes depicting a reality show hosted by a television channel have been well thought out and presented. Lakshmi Gopalaswamy fits the character very appropriately!

Shelly Calist’s exquisite cinematography and the absorbingly evocative score by Bindu Malini and Vedanth Barathwaj deserve special mention. Raymond Derrick Crystal too qualifies to join them both by his slick editing!