This romcom deliberates on the adventures of a man who holds the torch for a beautiful young girl and her missing slipper! 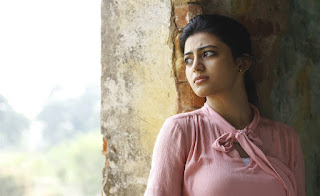 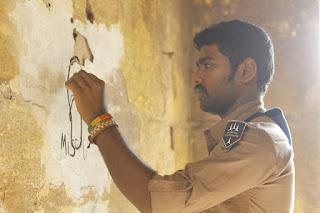 With too many young hearts seeking her hand, a youth goes out of the way to impress the girl he is in love with and when she loses one slipper while boarding a public transport, he leaves no turned to trace the ‘whereabouts’ of that missing slipper!
With such premise on hand, can a filmmaker go far in drafting an impressive screenplay and narration? Well, Jagannath does it reasonably well and the opening sequence of a weather report kind of love narration makes one sit up and watch!

The protagonist of the film is a commoner, a simpleton rather, Krishnan (Thamizh, formerly, Pakoda Pandi), who falls in love with Sandhya (Anandhi) a cute looking girl!
Anandhi has a big family issue that is on! Her dad (Jayaprakash) has been kidnapped by terrorists in Syria! Adding to her, one of her slippers, needless to mention, which was bought by her father, falls off while she hurriedly boards a bus that has started moving already!

Thamizh moves on in search of his lover’s (one sided?) slippers so as to impress her and eventually win her love!

Whether he is able to achieve his mission is the rest narrated in a manner that leaves much to be desired!

Thamizh is good but he breaks down crying for the flimsiest of reasons. Anandhi is adequate.

Surprisingly, both Yogi Babu and Bala Saravanan fail to impress with their punches! Ishaan Dev has come up with some lovely tracks. Deepan Chakravarthy’s background score is passable!

An earnest attempt to stretch a small theme into a full length feature film but the efforts do not exactly fructify!
En Aaloda Seruppa Kaanon-Review Movie Reviews Nikhil Murugan.