Good old classics made several decades earlier are our major sources for the process of documenting our film heritage as they facilitate the viewers to take walk down the memory lane to savor the best films from a bye gone era! Making classics immortal is no easy task as it involves the preservation of old classics and restoring those that were on the verge of vanishing into the thin air!

Chennai was once the main hub for all the four South Indian Film Industries but unfortunately not many films made in the silent era have survived! The Annual Film Preservation and Restoration Workshop held for almost a week at Prasad Studios, Chennai. This being the third year, Viacom 18 had come on board to collaborate with Film Heritage Foundation founded by Shivendra Singh Dungarpur, an award winning filmmaker, producer, film archivist and restorer! ‘This is basically a non-profit organization based out at Mumbai to work towards preserving and restoring India’s cinematic heritage!’ says he.

It is worth noting that Shivendra Singh Dungapur who is committed very passionately to Film Preservation and Restoration was closely involved in reviving Uday Shankar’s classic, Kalpana which was said to be the inspiration for S.S.Vasan’s classic, Chandralekha!

‘Our objective is not only to preserve films but also posters, song books, photographs etc!’ he adds.

According to him, film preservation is expensive as the films need to be maintained in a temperature and humidity –controlled environment. He further tells us that the process of restoration of films refers to digitization, clean up and color correction!

‘The process should be done keeping the original creator’s vision in mind!’ he points out!

We understand that The Academy of Motion Picture Arts and Sciences has come out with a document called, The Digital Dilemma that deliberates on issues connected with preservation!

While delivering his address at the Closing Ceremony of the Workshop, veteran filmmaker Adoor Gopalakrishnan mentioned about the changing guests of the audience both with respect to content and performance.

Says David Walsh, digital preservation consultant, Imperial World Museums & Training Outreach Coordinator, FIAF, ‘We can’t really blame the filmmakers concerned for not taking the initiative as they move on; it is an archive’s job, I think!’

Says Yamini Krishna, a research scholar who had attended the Workshop, ‘It is indeed a honor to be involved in the process of film preservation & restoration & this Workshop gave a thorough insight into it!

Arti Karkhanis from the National Film Archive of India, Pune, tells us that the process of restoration involves not just restoration of films but film related materials as posters, song books etc.

Dawn Jaros who is from the Academy of Motion Pictures & Sciences, L.A. delivered a special lecture on Conservation of Photographs and other Materials relating to old classics! 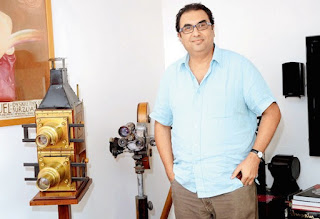 No doubt, these people are Guarding Angels of old classics!