Since quite a while, the movie, ‘Chennai 2 Singapore’ has been stealing the headlines! Ghibran’s music is said to be one of the main highlights of the movie. The songs turned out to become super hits among the youth and this factor in fact had given this movie a huge boost in terms of commercial visibility. As a mark of innovation, the film’s songs were launched across 6 countries!

Directed by debutant Abbas Akbar, ‘Chennai 2 Singapore’’s trailer was released recently creating a big flutter, all over! The fun, out of the box content in the trailer has been appreciated not only by the audience by also the trade pundits.

Says Abbas Akbar,’WeI knew the trailer was good but the kind of response it got was more than I expected. We are so happy the momentum ‘Chennai 2 Singapore’ has got and we will like to make full use of it and release the movie in a grand manner possible! I can say that the movie will be double racy than the trailer and the audience will enjoy the movie thoroughly. 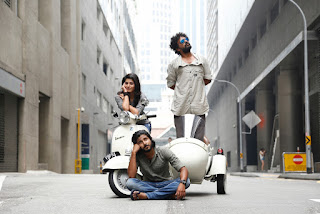 ait to undertake the journey from Chennai 2 Singapore from November 24th!