Films that showcase themes on love, especially about the romantic escapades of a teenage girl mostly try to exploit and expose the heroine to the hilt! But this flick by Dwarakh Raja, a short filmmaker who has graduated as a feature filmmaker through this, hasn’t gone that way! The very fact that the film that deliberates on the love of a school going teenage girl and her crush for a guy who is in his mid-twenties bears testimony to the film’s quality as there are no scenes at all, whatsoever, that cause embarrassment! The debutante director deserves to be complimented for that!

Dhruva the film’s male lead, Arjun, has carried himself adequately well throughout the proceedings and his performance is mention worthy in the scene where he breaks down at the hospital on seeing the sufferings of his mother who is in coma! He has also executed himself well in the scenes where he suffers silently at the instance of his teenage lover! But was it necessary to showcase his character as a chain smoker right through the film, exposing his styles of smoking in various situations? Could have certainly been avoided! This is despite the constant ‘advises’ of the heroine to the hero asking him to quit smoking!

Short is cute says the heroine, played by Venba who is a perfect choice for that character! Her performance is as cute as her own self! Also, she has lent the character a good volume of credibility! The director deserves mention yet again for his choice of the lead cast!

Charlie as the heroine’s dad scores in the scene where he sees her daughter sitting in a police station! Late Kalpana as the hero’s Mom creates a flutter in the second half while lying in the hospital bed in a state of coma, almost the whole of the first half!
Diya (Venba), a school going girl is in love with a lad, understandably employed in the I.T. sector with whom his two colleagues, Vivek (Linga) and Jaya (Jaya Ganesh), also his close friends, stay!

Not only his friends but he too disapproves the ‘advances’ of the little girl who has almost to stand over a stool to come close to his height who has no inhibitions whatsoever in professing her love to him as well as carrying on with it!
But the girl remains firm even when the matter reaches the ears of her dad who chides her for it in clear cut terms!

Meanwhile, Arjun’s mom regains her conscience and returns home and she loses no time in approving the calf-love of Diya, telling her son that she too had got married at Diya’s present age!

There is an auto driver, Velan (Sharath) who plays Diya’s custodian on wheels and the conversations between them both are engaging!

The film drags a bit at times but the director’s conviction to narrate a tale of romance that too without any exposure or exploitation sees it through!

The film is a bitter-sweet  romance 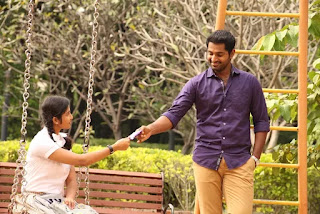 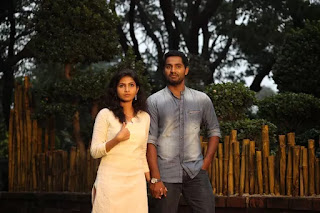 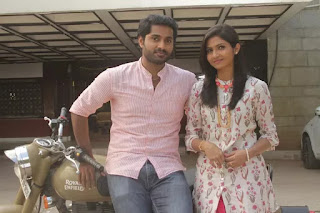 as indicated by the title!
Kadhal Kasakudaiyya-Review Movie Reviews