Rating-***
The much awaited and much hyped Ajith starrer showcases his chiseled torso like never before as he moves around in foreign locales sporting army fatigues and a salt-and-pepper hairstyle much to the cheers of his hard core fans. Ajith is certainly impressive in the action sequences that too, reportedly without using dupes with the film’s end-titles bearing testimony to that! The film has in fact opened up worldwide extensively screened in very many screens. The film’s script that has been set on foreign soil as well as the execution give a feeling of watching an Hollywood as the genre happens to be a global spy thriller!

Right from frame one till the time the curtains are dropped down, the scenes and sequences, the dialogue included, stand out as an interesting exercise in entertainment with never a dull moment !Ajith keeps churning out apostles about good and bad and about trusted friends who turn foes for materialistic reasons!

Vivek Oberoi makes his debut in Tamil as the villain of the piece and has gone about his character in a stylish manner As an antagonist, he makes his moves like the coins on a chess board which are countered by the protagonist effectively in a reciprocal manner! As an actor, Vivek manages to generate the much needed momentum!

Kajal Agarwal’s glam-quotient goes missing but she has carried herself as the 'carrying' wife of a dare devil husband who will stop at nothing to right the wrongs! She has emoted adequately well too!

This flick stands out a vehicle of introduction for Akshara Hassan at Kollywood who is already two films old at Bollywood! Just a scene or two for her and she is shot to death! One would expect more of space for her in the proceedings!

Just to prove that the team has taken logic into account the director has permitted the entry of Karunakaran into the screenplay in the ‘capacity’ of a translator as most of the scenes showcase conversations in Tamil but he goes missing in the second half!
But yet, he makes his mark!

Anirudh’s background score generates the much needed impact but the songs are just passable! Vetri, the cinematographer deserves all praise for his breathtaking visuals.

Ajith lets loose philosophical statements, right in the beginning, at the end as well as at other situations in between!

Ajay Kumar (Ajith Kumar), Aryan (Vivek Oberoi) and a team of others serve the Anti Terrorist Squad. A missile launch or so is underway but Ajay is not aware of the fact that a couple of his teammates are working for some external powers and are poised to take advantage! Ajay’s wife is Yazhini (Kajal Agarwal) is carrying but would dare to face and overcome any kind of hurdle, at the instance of her husband!

Then there is Natasha (Akshara Hassan), a computer whiz-kid who holds the key to the challenges that face the launch! The moment Ajay gets it from her, Aryan shows up to show up his true colors! How Ajay saves the world and plays the ‘terminator’ for Aryan is the action packed rest! 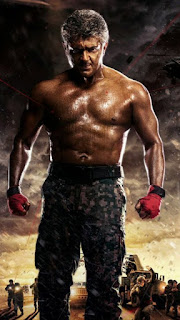 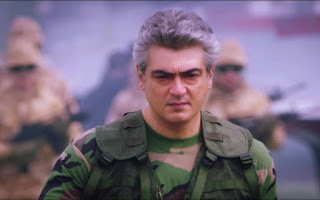