For any actor the debut movie will be such a huge learning curve. And when the shooting is done and the movie is ready to hit the theatres in just a few more days, the nervousness and excitment will be beyond measurement. Actor Vasanth Ravi, who has played the male lead in Ram directorial 'Taramani' is going through this exact phase now as his debut venture  is all set to be released worldwide on August 11th. Vasanth Ravi says, " 'Taramani has been an incredible experience for me. I have known director Ram sir for a very long time. When he came up with this script and felt I would be apt for the male lead the first thing was that i was jumping in joy and the next thing was I asked him what kind preparation i need to do for this role. To my surprise Director Ram sir asked to to come to the shoot with an open mind without any preparation. He guided and taught me so much about cinema and acting in the process of doing Taramani. I play a call centre employee in the movie. It was a delight to work with Andrea. I think she has pulled off her character brilliantly. The teasers are such a huge hit among the youngsters mainly because of the relatable dialogues in it. The movie will be full of such scenes and dialogues. I feel so fortunate to have done 'Taramani' and being launched by Director Ram sir. I thank J Sathish Kumar of JSk film corporation for trusting this film and giving the much needed  push on par with the star movies.I can't wait for August 11th !!!" Says the all thrilled Vasanth Ravi. 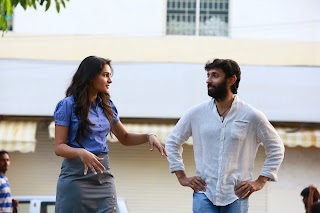