Real estate mafia is one prevailing problem as far as the construction industry is concerned. This flick which also deliberates on life after death takes an in-depth look into the happenings that cloud the mystery about the death of a civil engineer who is believed to have been murdered for gain!

The film gets into the action mode right from the very first frame and the director has managed to sustain the suspense element till the very end!

Ganesh Ragavendra’s music both the songs as well as the background generate the much needed impact despite the fact that a song or two break in at the most inappropriate moments!

The story penned by Stephen is a bit complex in nature as it discusses the existence (or its non-existence) of life after death, especially of ghosts!

A civil engineer named Stephen is desirous of constructing a massive high rise structure. A real estate don eyes that property and negotiates with Stephen though unsuccessfully! On expected lines, Stephen is brutally attacked by the don’s henchmen and is believed to have breathed his last!

The film opens with the murder of Stephen and a stylish cop (Rahman) enters the scene. He makes an appearance one more time before disappearing!

SI Karuna takes up the investigation and starts move up the case. His lover Ammu is waiting in the wings to marry him! Then there is Sophia (Iniya) who is supposed to be Stephen’s lover! Then there is another character named Emmanuel who is behind Sophia.

At one stage, as the screenplay unfolds, the audience is given to understand that Stephen is actually not dead, thanks to the investigations of Karuna who doesn’t believe in the existence of ghosts!

Later in the narration, Karuna too is confused and like his lover, he too states that ghosts may or may not exist! Not only Karuna but the audience too feels the same way! But the puzzle gets solved but still, the screenplay doesn’t get rounded up, ending in an open ended manner!

Nikhil Mohan as Karuna looks fit and exudes dynamism. Iniya is good but her characterization only adds to the confusion.

Pratap Pothen’s character could have been given expanded a bit for all the build-up given right through the narration!

Rahman could have been certainly used better. M.S.Bhaskar and Kovai Sarala fail to impress. 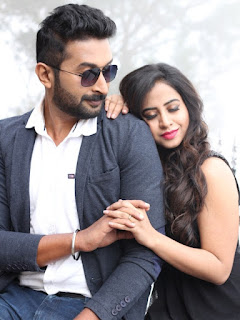 The director could have done a little more of homework on the screenplay which would have lifted the film to a better level!
and PRO Yuvaraj Iniya Movie Reviews Nikhil Mohan Sadura Adi-3500