It was only recently that 'Spiderman: Homecoming stole the hearts of millions of viewers!Well, A.R.Murugadass' 'Spyder' with Mahesh Babu and Rahul Preet Singh is all set to storm the screens!

Lyca productions , the emerging giants in the Tamil film Industry which holds an enviable record of acquiring movies that are punctuated by both content and presentation has lapped up the theatrical rights of 'Spyder'!

The ensemble cast includes S.J.Surya, R J Balaji Nadiya, Bharath among others.
Yet another time,  ace-cinematographer Santhosh Sivan is back, joining hands with the veteran filmmaker, A.R. Murugadass!

Harris Jayaraj has tuned in a couple of mesmerizing songs and Sreekar Prasad has assumed responsibility for the film's editing which has stunt choreography by Peter Hein, the National Award winner.

Tagore Madhu and N.V.Prasad are the producers of this big budget flick the release of which has been scheduled in the festival month of September! 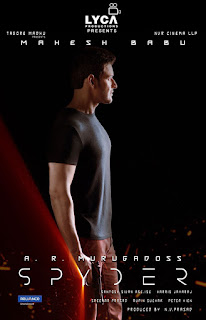