Though he is certainly one of the most talented composers of this generation, music director and singer Ramesh Vinayagam hasn’t reached the pinnacle of success yet, whatsoever the reasons are! As a matter of fact, Ramesh is more popular at Tollywood than at Kollywood though he primarily belongs to the latter territory. His outing in Telugu as a singer in the film ‘Khaleja’ has won him a Film Fare award. He has also scored the music for a number of Telugu films. One reason that is basically attributed for hi career not taking off is that he has continued to stay glued to his work always and has never ever taken the initiative to market himself before marketing his talent as a scorer! Recently, Ramesh has come to the limelight for a specific reason that has just put him on the pedestal to prosperity! He has just launched his website besides his Apps both of which were released recently.

Says Sharad, a well known composer at Mollywood, who had also scored the music for the Tamil film, ‘180’-‘I have known Ramesh Vinayagam for quite a long time and he is a very close friend. Unlike some of the contemporary scorers of the times, he doesn’t copy from other composers abroad and has always maintained his originality! He is immensely talented and is capable of delivering what the situation in a film demands in a very dedicated and diligent manner! I have even recommended his name to some of my filmmaker friends in the Malayalam film industry. So, be ready, Maams!’

S.B.Kandan, a well known director who has been associated with several television serials as well as the maker of the Tamil film ‘Jerry’ showers heaps of praises on Ramesh Vinayagam. ‘I have known Ramesh for nearly two decades! It was my brother Mouli who introduced Ramesh to me and we have been closely associated in the making of serials, ad films etc. his knowledge of music is very deep and it is quite a learning process to work with him! The songs that he has so far scored for the Telugu films made by my brother Mouli have been super hits! He is one composer who is capable of resorting to different genres of music while scoring for different kind of songs in a film! In my opinion, what he lacks is that tactic to sell his music but there is no dearth of talent in him at all!’

Ramesh Vinayagam has been associated with the films of director Vasanth since the days of ‘Yei Nee Romba Azhagai Irukkey’. No one can forget the tunes of Ramesh in the film, ‘Nala Damayanthi’ that was produced by Kamal Hassan. It is worth noting that Mouli who wrote and directed that Madhavan starrer, was the one who recommended Ramesh’s name to Kamal. At that point, Ramesh Vinayagam was the other composer other than Ilaiyaraja to have been assigned to handle the music for Kamal Hassan’s home production!

Director Vasanth has once again recalled Ramesh Vinayagam not to score the music but to render a song under the music of Yuvan Shankar Raja in the film, ‘Moondru per Moondru Kadhal’.

Ramesh has been one composer who doesn’t scout for opportunities and that’s perhaps why he is yet to taste success at Kollywood. But even without that he has composed the music for several successful films as ‘Aunty’, ‘Manchi Rojulu’, ‘Paila Pacheesu’ etc.

Ramesh gives us more inputs of himself: ‘I have also associated myself with composing the music for dance ballets! Whenever, I find time I experiment with creating new ragas. The Gamaka Box is one such experimentation of mine (he doesn’t prefer to term it innovation!) that propounds a Notational system of writing Carnatic music.’

It is worth noting that Ramesh has even composed the music for a film called, ‘The Commom Man’ in which Ben Kingsley played the lead.

We understand that Ramesh Vinayagam has a good number of local as well as global projects lined up for him in the near future!

Sure, Ramesh is expanding his horizon extensively equipped with both talent and tactics! 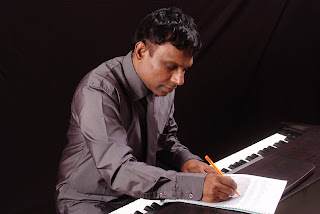