March 11, 2012
Rather than being identified as Suriya’s younger sibling, Karthi has own earned a separate identity for himself and as at the moment, he is one of the busiest actors of Kollywood. While the political satire, ‘Saguni’ is gearing up for release on the 14th of April, he has reportedly commenced work on a project with director Suraaj, titled, ‘Alex Pandian’ which is supposed to be an action comedy following which he will begin a project with Rajesh M., one of the most sought of filmmakers at Kollywood, presently. Tentatively titled, ‘All in All Azhagu Raja’, the film will obviously be high on the humor content, we hear. It is learnt that the moment Karthi heard the one-line narration from Rajesh he immediately decided to go ahead. Newcomer Shankar Dayal’s ‘Saguni’ will certainly present Karthi in an entirely different light, a unit hand informs us.

When quizzed about the crux of the film, Karthi was only too eager to talk about it! ‘My role is that of a guy from a rural side in the State, named Kannan, who is basically very intelligent. The course of events that force him to move up to the city which eventually makes him turn a politician is all what the narration is about!

Being a newly married man, Karthi would evidently opt to spend time with his better half, as much as possible; but how does he manage the situation as he has so much of work on hand?

‘It is very simple. I take my wife along for my shoots. The only exception was when I had been to for the sake of shooting some songs for ‘Sakuni’. I did not take her along because of the nail biting cold that was prevailing there about which the whole unit was informed well in advance. Otherwise, she is around, always!’ he smiles, mischievously, ruling out the possibility of any rumor springing up regarding any link-up with his heroines! Karthi is really happy that the songs were shot there at where several James Bond movies as well as Steven Sielberg’s ‘Schindler’s List’ was shot.

Touted to be a mass entertainer, ‘Saguni’, it is learnt that Karthi has sported several looks in the film which are quite different, just like his portrayal, scenes-wise. The film is releasing in Telugu too, simultaneously and to facilitate that process certain scenes in the film have been worked out, especially for the Telugu audience as he has a huge fan following there.

Santhanam who teamed with Karthi for the first time in ‘Siruthai’ has now become a constant in all the three forthcoming films of Karthi. Their on screen chemistry clicked at the very first instant in ‘Siruthai’ and hence one can expect their combination to work out well in the other films together too! Santhanam is said to be co-starring with Suriya too in Hari’s film which is a sequel to ‘Singam’

Pranitha pairs up with Karthi for the first in ‘Saguni’ and a unit hand tells us that their romance will really rock! Hope Karthi’s wife, Ranjani doesn’t mind!

It is for the first time that Karthi is working with a new director as he has associated himself only with established filmmakers so far. According to the debutante director, Shankar Dayal, Karthi’s character in the film is the present day equivalent of Lord Krishna.

It was said that Karthi’s character has shades of the political lobbyist, Nira Radia of 2G fame but from what the first time filmmaker tells us that the film will have political elements but otherwise it is a typical commercial film.

Interestingly, ‘Saguni’ has no villains with whom the hero wages a battle but only battles the situation and comes out victoriously, we hear. As a last minute reshuffle, Prakashraj has come on board in place of Salim Ghouse who has played the villain in films as ‘Chinna Gounder’ with Vijayakanth and ‘Vettri Vizha’ with Kamal Hassan. The reason for the last minute change is is learnt that the team of ‘Saguni’ wasn’t very happy with Salim’s show in a cameo when they viewed those sequences later and hence the decision. 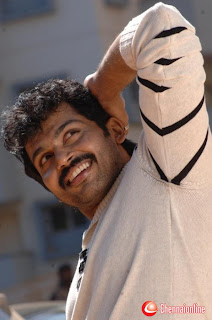 Karthi too is socially conscious, just like his father, actor Sivakumar and brother, Suriya. He is expected to play more active roles along with his brother in taking Agaram Foundation to the next level.
Kollywood Movies News Reel